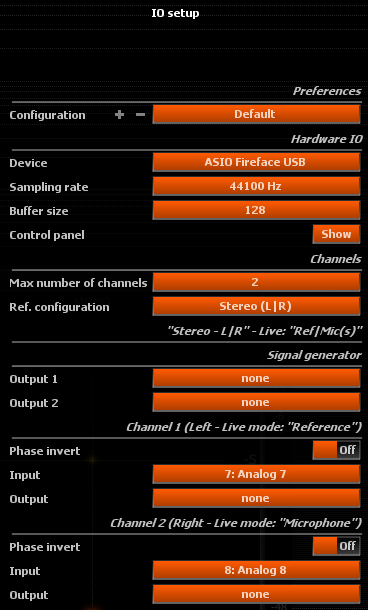 This setting lets you choose amongst a selection of devices, depending on your particular hardware configuration.

This disables hardware input and output altogether. This is the recommended choice if you do not want to take advantage of Pure Analyzer’s built-in audio capabilities, for example if you’re working with a SampleGrabber inside a DAW or Avid Venue console setup. With some sound cards that aren’t multi-client capable - meaning only one program can access it at once - disabling I/O is necessary to continue using another program simultaneously.

Any installed soundcard(s) will be listed here. Under Windows, it might appear several times, in which case be sure to select the native ASIO driver for performance, not an emulated driver which be labeled something like ASIO DirectX Full Duplex Driver, Generic Low Latency ASIO Driver or similar. 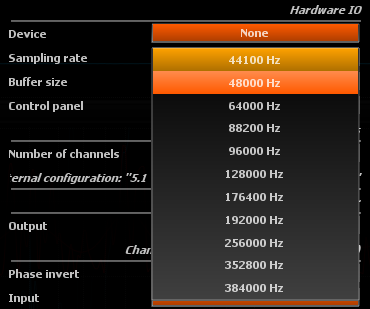 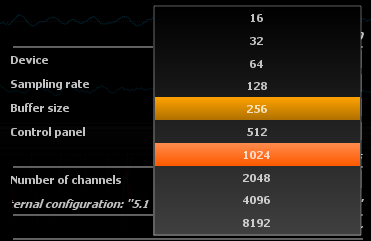 Displays the current soundcard I/O buffer size. Depending on your soundcard, you might be able to change this to a different value directly in Pure Analyzer without opening its control panel beforehand. Smaller buffer sizes leads to a shorter latency between incoming audio, display update, and audio output. This setting is certainly not as crucial as in the context of live sound processing, so there is no need to go down to extremely small values here, as this only increases the system load without offering any practical advantage.

Keep in mind a display refresh rate of 60Hz means one frame lasts for approx. 16ms, which is a bit longer than one 512 buffer at 44.1kHz, so the display will always lag less than one frame after the audio with such a setting.

Opens the ASIO (Windows) / CoreAudio (MacOS) control panel for the selected soundcard driver, where you can make further settings depending on your particular hardware, such as routing, input gain etc. 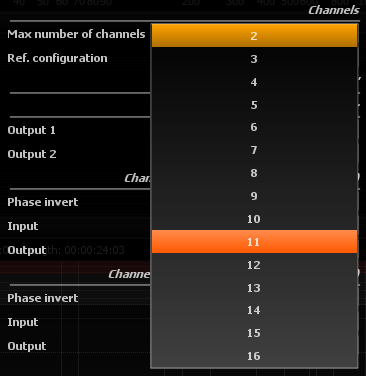 Selects the maximum number of channels to be used by the application, or equivalently the number of channels in the application I/O bus. You should set this according to the source material format you want to analyze and visualize. This determines notably how many real-time curves are displayed in the Spectrum analyzer view, whether the Surround scope is displayed, etc. 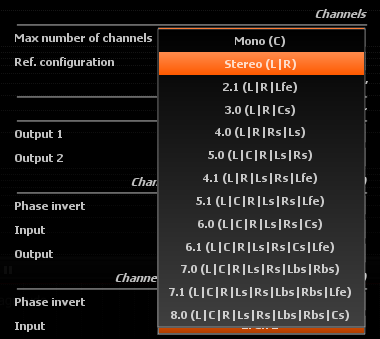 Depending on the setting above, the possible standard channel configurations will be listed here, and will be a subset of the following:

The channels are labeled according to this configuration to make them easier to identify. 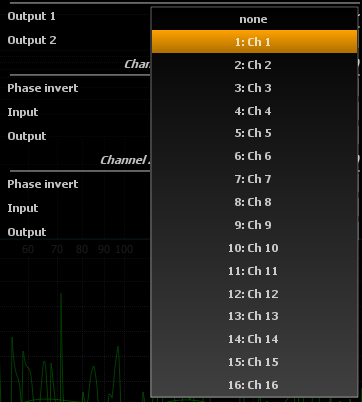 Selects one or two physical channels to which the Signal generator output should be sent.

In case of stereo output, the signal is identical on both channels. This is provided as a facility for soundcards with minimal routing capabilities, and to avoid using a Y patch cable.

The following group of settings are displayed for every channel selected in Channels. The heading displays the channel number, followed by its name, and whether it corresponds to the reference or microphone input signal for the first two channels in Live IO mode.

When engaged, the phase of the corresponding channel is inverted in order to compensate for a reverse polarity somewhere else in the signal chain. Default is off.

This can happen with incorrect or non-standard wiring, when a phase switch is engaged on the preamplifier, an analog device has an odd number of inverting stages … Use this with caution as it can compromise measurements if the “real” input signal phase does not match.

Selects which hardware device input should be routed to the corresponding internal application input.

Selects which hardware device output the corresponding internal application output should be routed to.