You will notice the phase curve is generally very sensitive to spurious noise and interference, and that in general it requires a bit of work on your part in order to read and interpret it. Outside of the studio, in noisy places such as a live venue, phase smoothing is almost always mandatory in order to get a readable curve. It is important to understand that smoothing destroys information in order to achieve this, so you should always double-check what you see on the smoothed curve against the original, raw data.

The algorithms employed here are specific to phase, and have more options than the regular smoothing employed for spectrum magnitude, transfer function magnitude and coherence, in case you wish to fine-tune their behaviour. 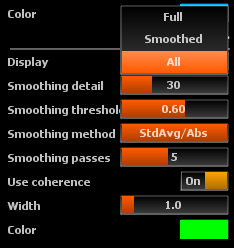 Size of the pen used to draw the phase curve.

Color of the pen used to draw the phase curve.

Adjusts the overall level of detail that remains after smoothing, in percent. Do not set this too low or you might miss out important information such as phase shifts at critical frequencies such as those associated with loudspeaker crossover networks.

Values around 30 are appropriated in the general case.

Amount of relative local phase variation that is allowed to pass through. Raising this filters out local phase curve detail, such as noise. Setting it to one suppresses all detail, whilst setting it to zero leaves the curve untouched.

Sets the number of smoothing algorithm iterations. You can apply the smoothing process several times in order to get better results whilst still retaining local detail. Increasing this value requires more CPU processing power, so it is advised to lower this value if you find your computer cannot cope with the load. Default is 5.

When enabled, the portion of the curve that corresponds to a phase rotation is not displayed.

Low-coherence regions are caused by low signal-to-noise ratio, multiple paths, etc. which cannot be accurately described in terms of a simple gain and a phase shift anyway, so it makes sense to suppress excess detail in these regions to improve the curve’s general readability. 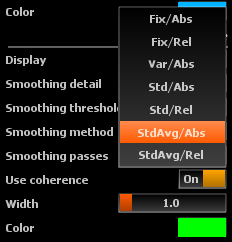 The general principle is that for each curve pixel, the algorithm determines the amount of smoothing applied in its neighboring region, based on a threshold determined from other pixels in the region. The smoothing therefore adapts to the curve content, applying more smoothing in noisy regions.

StdAvg/Abs was determined to be method giving the best results in the general case, and is set as default. You might still want to experiment with other algorithms, especially if you have a slow computer.

This is the simplest and least CPU-intensive phase smoothing algorithm. Smoothing uses surrounding pixels below an absolute threshold.

In practice, this means curve regions with large variations are applied stronger smoothing.

Same as above, using a relative threshold.

A variant of first algorithm.

The threshold is determined from the pixels standard deviation, which is a statistical measure of data variation.

Same as above, using a relative threshold.

!> Please keep in mind the smoothing process is purely a visual aid, and is not intended to compensate for an inadequate measurement setup. In short: always rely on your ears and scientific knowledge first !