When using Local Audio Path (LAP), synchronisation issues can be identified when the synchronisation indicator in SPAT Revolution (bottom left corner) turns to red. This can in some cases result in clicks, noises, and or loss of sound.

All ‘green’ indicators mean the sync is correct.

Thanks to the DAW templates provided, this should not happen unless the required routing is not in place (session modified, routing unpatched). To work properly, the SPAT Send plug-ins instances must be processed by the DAW before the SPAT return plug-in instances.

To force the DAW to process this way, each track with SEND plug-in inserted must be routed (directly or indirectly) to the ‘return’ tracks, using DAW internal routing (ex: dummy busses in ProTools, direct routing in Reaper).

If you see red indicators in the bottom left corner section of SPAT, this could be related to having a mismatch in frame size (buffer) or sample rate between the DAW and the SPAT Revolution.

Frame size (sometimes called buffer size or block size) should be matched in the host DAW and SPAT Revolution. A red message would identify a different frame rate the host DAW. Simply double-clicking on smp/f message in error will automatically change you SPAT block size setup to match the incoming audio.

If the audio processing is too demanding for your computer at the current block size and sample rate, you may also experience dropouts and sync problems due to CPU overload.

If you are experiencing lost sync when using Local Audio:

Also, please be sure to carefully read the detailed advice of the various DAW in the Third party integration section of this guide and refer to the various provided templates.

When dealing with SPAT Send and Return, you do not need to have a hardware device configured in the preference. In this case, SPAT Revolution will automatically adapt its sampling rate and synchronize to the incoming software audio I/O.

Sync issues encountered in SPAT Revolution when using the Local Audio Path workflow can often be fixed when following some guidelines for routing order inside the DAW. Thanks to the various DAW templates, this is done for the users.

To work properly, the SEND plug-ins instances must be processed by the DAW before the RETURN plug-in instances. To force the DAW to process this way, each track with SEND plug-in inserted must be routed (directly or indirectly) to the tracks hosting a RETURN plug-in, using DAW internal routing.

Following are four examples of recommended practice with DAW routing, which should cover the main use cases. If your problems persist even after implementing these suggestions, don’t hesitate to drop us a line at FLUX:: support.

PLEASE NOTE: The mixing of HARDWARE inputs and LOCAL AUDIO PATH may report a sync loss, as SPAT Revolution cannot guarantee correct sync in this scenario. Proceed with caution if this is unavoidable. This is not officially supported._

In simple projects, when having a single return plug-in on a master track, you should not encounter any sync issue as long as each SEND track is routed to the master.

Single RETURN on an AUX track

Issues may happen when return is inserted on an AUX track. Make sure that each SEND track is routed to the AUX track (RETURN track). Here is an example using AUX send (see examples below).

★ You might achieve the same by routing the track outputs to the bus.

When several RETURN tracks are needed (for example several rooms to render from SPAT Revolution, and/or several output stream formats), you will have to route each SEND track to each RETURN track, using the same technique.

As it can quickly become complicated as the project grows, in the following example, the use of a ‘dummy’ track, avoids using several AUX sends on the ‘SEND ‘tracks. It makes routing clearer and easier to implement on larger projects. The ‘dummy’ AUX track is routed to all the RETURN tracks (using AUX sends or patching the output to a multichannel/multi-format ‘dummy’ bus).

Then, simply route all your SEND tracks to this ‘dummy’ track by simply patching its output to the multichannel/multi-format ‘dummy’ bus or via the use of aux send.

One of the good practices to deal with the source/object you are sending for external rendering is to use tracks as dedicated objects. (Similar to many object-based mixing workflows proposed by DAW.) This way you can leave the session audio tracks and their channel insertion as they are and simply send your audio track to the SPAT SEND object track. This allows you to send a single audio track or multiple ones (stem) to the SPAT SEND object track.

Doing this can segment your external rendering routing and is highly recommended to prevent audio track delay compensation systems in DAW to come and jeopardize the audio synchronization between the DAW and SPAT. This as well ensures that your audio track automation on levels for example is respected as some DAWs don’t have post-fader insertion (a pre-fader insert with SPAT SEND PI will send audio to SPAT Revolution prior to your fader automation).

The above best practice ensures as well that you keep both the dry signal and the SPAT RETURN signals independent (when the mix requires to switch easily from one to the other), add one object AUX track per audio track to be sent to SPAT, and insert the SEND plug-in on these object AUX tracks.

This way, you keep the dry signal on the audio track’s output.

Some users have experienced an issue where SPAT SEND and RETURN plug-ins are not cleared from the shared memory when used with certain third-party DAW hosts (or seen after DAW crashes). Although this should not happen and have been intensively improved in the latest releases of SPAT Revolution, a Clean Shared Memory option can fix some connection issues (ghost modules, duplicated modules, modules not connecting when opening session). This can sometimes be seen where SPAT Send and Return modules appear in the SPAT setup page when there is no DAW host software running in the background. It can cause problems, when a host with plug-ins is launched and more SEND and RETURN plug-ins appear to be doubled.

Although rebooting the computer would fix this issue, the workaround if this is happening with your particular third-party software, is to invoke a special debug action called Clean Shared Memory. It is available by the Help menu Help/Clean Shared Memory

If this command is executed, SPAT and the plug-in host will then need to be restarted.

There are also some performance preferences that may help in the case that your host machine CPU is overloading and causing audio glitches.

To lower UI graphic frame rates, go to the SPAT preferences. Changing the Edit Frame Rate will reduce pressure on the graphics updates and important when a host machine does not have dedicated GPU and CPU resources.

The latest release of SPAT Revolution includes a new Multi-Core Parallel Computation Algorithm. In the preference of SPAT Revolution, in the Engine section at the bottom, you can choose various computer hardware presets that match your setup. This is a simple step to tuning the computation algorithm.

If you are still experiencing performance and sync issues, you may want to ensure that your hardware configuration meets the SPAT Revolution requirements and recommendations

Consider as well to kill as many processes not required as possible (Wi-Fi/internet, background services and activity).

Included in release version 20.12 is the ability to display performance (CPU) measurements. This can be done in the Help menu Display Performance option. This can be accesses as well with shortcuts Shift + Option + Command + P.

SPAT Revolution v20.12 introduced a new Multi-Core Parallel Computation Algorithm that is key to optimizing your hardware. This is for both the automation and the audio processing. The Display Performance option stated above will be our best ally to monitor the results. This can be accessed with shortcuts Shift + Option + Command + P. 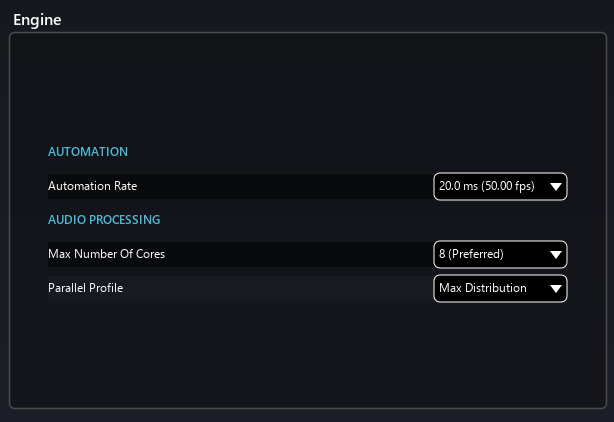 Automation Rate provides the ability to set the refresh rate (frequency) of the automation. By default, we use 10.0 ms (100.00 fps). This can be decreased to lower the frequency if you see that automation is becoming a burden for your system with such a fast refresh.

Max Number of Core is your ability to make more or fewer cores available to the SPAT Revolution algorithm. By default, it will be at your number of native core. Not hyper-threading. This can be increased or reduced. Watch not to take all cores for a multitasking computer.

Lastly are the 3 presets for you to choose from, to adapt the parallel profile to your use: