Each Virtual Room in SPAT can have its own artificial reverberation. Reverberation is a very important element in the psycho-acoustic perception of localised sources and immersive sound fields. The reverb processor in SPAT is a multichannel algorithmic 3D reverb based on feedback delay networks. The SPAT reverberation engine is designed to synthesise the experience of the virtual sources, and the listener all being placed within the same virtual acoustic space. Virtual spaces can be tuned, scaled and stored. Open the Artificial Reverberation graphical editor by clicking on the (**R**) index at the bottom of the list of sources on the left side panel of the Room. 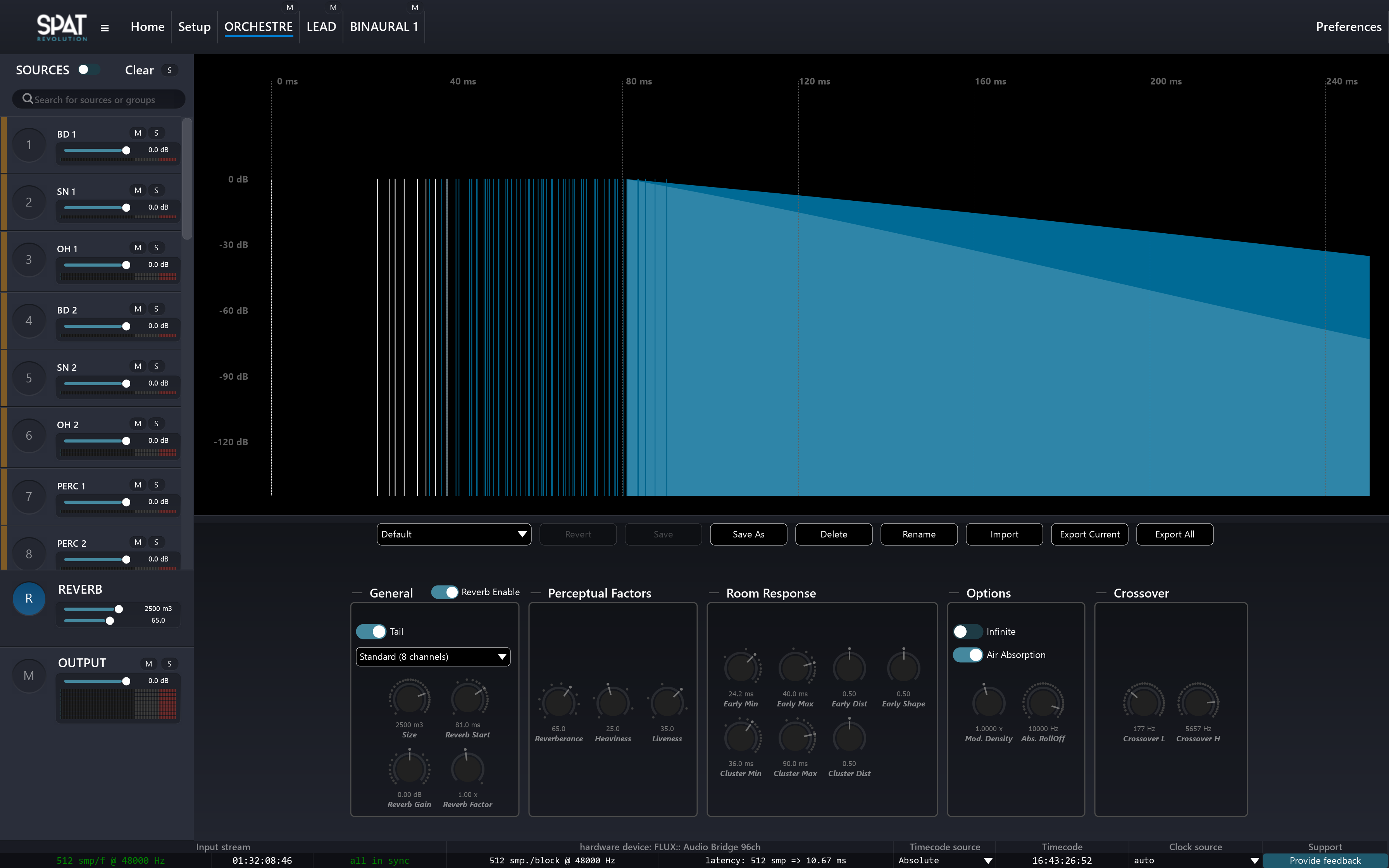 Internally, the SPAT Revolution reverb engine models many technical acoustic parameters, but the user interface has been simplified a great deal, to make artificial reverb design more straightforward and functional.

Some Spat Reverb parameters control how the acoustics are perceived.

Alongside conventional tuning parameters which you might be familiar with, you will also find perceptual parameters, such as heaviness, liveness and presence.

These Perceptual Reverb parameters have been derived from the same IRCAM research experiments which were used to define the Perceptual Factors of sources such as warmth, envelopment and brilliance. These can be found among the parameters for each virtual source.

The SPAT reverb designer can be used for a lot more than only simulating a “normal” acoustic space. For example, you could try to design a totally unreal space with continuously modulating acoustic properties or a space with infinite reverberation.

Try to switch the Infinite option for an immediately impressive immersive effect.

Every variable of the Virtual Room reverberation can be directly edited through the onscreen controls in realtime.

The reverb designer excels at creating static acoustic settings that will add all the dimensionality and immersive depth to a virtual scene. It also invites more creative reverberation ideas. Remember it works in 3D and interacts deeply with the parametric design of all virtual objects that are expressed through it.

This is no ordinary reverb.

The SPAT Reverb is a true acoustic modelling multichannel reverb, not just a so-called true stereo reverb. Despite its internal complexity, the user is invited to morph and modulate the characteristics of the virtual acoustics. To make this process fluid and natural, the parameter controls have been carefully designed so that they do not glitch. This invites continuous parametric modulation ideas, for designing out of this world reverberant spaces, in realtime.

The Artificial Reverberation editor has its own preset management system, where you can save pre-designed models into a user defined preset list or to disk.

This is useful for building up a collection of pre-designed reverberation spaces and for designing models that might closely match the measurements of actual spaces you already know. 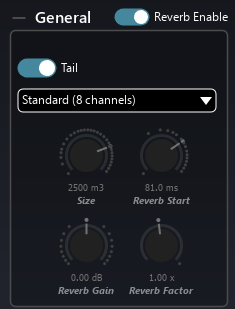 Enable/disable the entire reverberation engine for the room. All the components (early, cluster and tail) of all sources will be affected.

Enable/disable the tail of the reverberation engine for the room.

Internally, spatial variations are computed using a kind of 3D network of reverb, and this setting toggles between an 8x8 (standard) or 16x16 size (high). The choice of which sounds best is left up to you, as this depends on the source material at hand, although it must be emphasised that the high density setting consumes fairly more CPU and that the colour of the reverb can be altered by this setting, particularly at some extreme parameter setting combinations.

This is a meta-parameter that takes care of varying several other parameters in order to quickly set the equivalent size of the virtual room, adjusting early, cluster and tail reverb parameters to match the room characteristics.

Reverb start sets the duration between the direct, dry source signal, and the first late reflections, or start of the reverb tail.

Please note its value can never go below that of the cluster minimum time, as the reverb tail is fed with a signal derived from the cluster section. 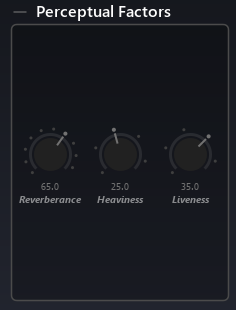 Reverberance affects the amount by which the listener perceives the music to be prolonged by the reverb when the musical message suddenly stops. The effect of this setting is also obvious when the source material is of percussive nature. Reverberence is tightly related to overall decay time of mid-frequencies, which in turn is the time taken by the late reflections to vanish into silence. 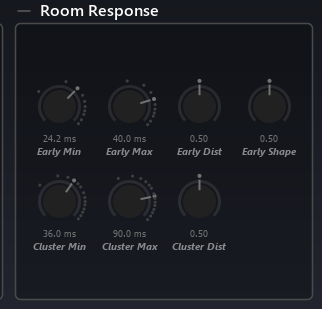 Early refers to the Early Reflections stage of the Room response, which is one of the most significant stages involved in our rapid aural perception of spatial properties and sound source localisation.

Cluster refers to a secondary iteration of room response reflections and is quite significant in the cognition of room acoustics.

Tail refers to the diffuse reverberations that eventually decay in a direct relationship with the size and reflectivity of an acoustic space. The tail section of a reverb does not contribute much to the localizability of a sound source in a space, but instead gives a sense of depth and ambiance.

Early reflections minimum time, i.e., the time at which the early reflections start to appear, in milliseconds. This is the similar setting of the ubiquitous “pre-delay” found on most reverberation processors. It represents the time between the direct sound and the first early reflection.

Early reflections maximum time, i.e., the time at which these cease to appear.

See Early Min. Please keep in mind the cluster is fed with the input of the early reflections’ processor section, as is shown accordingly on the display. 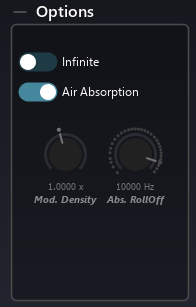 When activated, decay time temporarily rises to infinity, making the signal recirculate indefinitely inside the reverberation engine. This is best suited for on-off special effects such as “deep-freezing” audio material, or if you’re looking to create something fairly less conventional than a fade-out for the end of your track.

Simulates the frequency-dependent absorption of air, where high frequencies roll off quicker than low-frequencies with respect to distance. You’ve most probably noticed this real-world phenomenon when you’re far away from a concert venue and only able to hear the bass, and gradually start to hear the whole mix as you get closer.

Scales the modal density with respect to the current setting, which is internal to the application engine, and depends on other parameters such as reverberation time. The modal density governs the frequency “smoothness” of the verb engine. Increasing this setting reduces the graininess of the reverberation. Adjust to taste, depending on the source material and desired result. 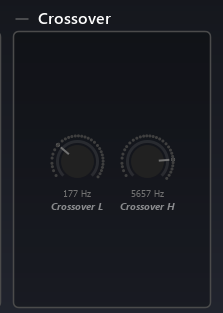 Sets the frequency below which decay time is determined by the heaviness setting, expressed in Hertz (Hz). Default value: 177 Hz

Sets the frequency above which decay time is determined by the liveliness setting, expressed in Hertz (Hz). Default value: 5657 Hz