New on the 22.02 build, this parameter allows to trim the source gain on each room. A source can so have a different level for each room, which can be useful for monitor, musician headphone monitor, N-1, …

Only the parameter dedicated to the current room will be displayed, but it’s possible to display all the specific gains using the filter and selecting “Room gain”. 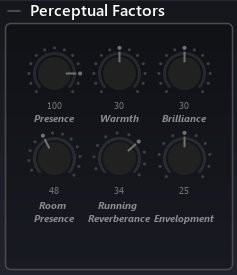 This parameter group holds settings affecting the way the sources direct and reverberated acoustic properties are perceived by the listener.

As touched on previously, these are not simply names stuck onto a single internal parameter dictated by the inner workings of the algorithm. Instead, a true perceptually oriented approach is used in the design, where a test panel of listeners is presented with a test-set of sounds, constructed from several variations of the reverb engine inner parameters. The listeners are then asked to rate each set onto a few different scales with perceptually and aesthetically meaningful names. Using principal component analysis (PCA) and optimization techniques, we then built an algorithm which reverses the process and automatically maps a given set of perceptual factor values to the many internal reverb engine parameters.

As a general guideline, we encourage you to learn the meaning of these parameters by carefully listening to the audible characteristics when adjusting them. We do provide a short explanation of each of them below, but training your ears is really the best way to be able to use these in context.

Source’s presence refers to the prominence of the direct sound with respect to the reverberated sound. It is not just equivalent to a dry/wet ratio, and is influenced by other settings such as distance, radius and drop factor.

Presence of the low frequency content part of the source.

Presence of the high frequency content part of the source.

Prominence of the reverberation with respect to the source, or in other words, how much the room sound dominates the overall sound.

This parameter controls the amount of perceived reverb when feeding a continuous music message, where the overall sound is a tight blend of the dry and wet signals and the reverb part cannot be mentally separated. It is linked to the early reflections decay time of the SPAT Revolution Reverb engine. N

This setting is not the same as the ‘reverberance’ in the Reverb Properties.

Envelopment corresponds to the perceived notion of how much the listener feels that they are surrounded or immersed by the ambient sound. In a multichannel configuration, one could describe this as the feeling of being wrapped inside the imaginary “sound sphere” that the listener pictures in her mind. It can also be described as the energy of the early room effect with respect to direct sound. 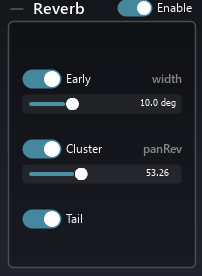 Toggle whether a source will use the reverberation engine.

Toggle whether a source will use only some or all of the different reverberation stages.

Early refers to Early Reflections stage of the Room response which is one of the most significant stages involved in our rapid aural perception of spatial properties and sound source localization.

Cluster refers to a secondary iteration of room response reflections and is quite significant in the cognition of room acoustics.

Tail refers to the diffuse reverberations that eventually decay in a direct relationship with the size and reflectivity of an acoustic space. The tail section of a reverb dœs not contribute much to the localizability of a sound source in a space, but instead gives a sense of depth and ambiance.

Controls the width of the sound projection lobe of the early reflections from a source in the virtual acoustic space, in degrees. The minimum setting, 1°, gives a very directional source, whereas 180° makes it omnidirectional. 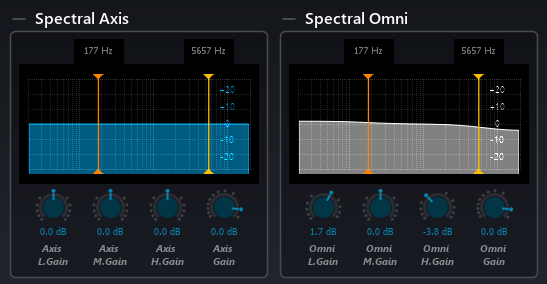 These two spectral processors can be considered as being equalizers that have been especially designed for virtual sound emitters simulated in virtual spaces.

This filter section is for equalizing the omnidirectional part of the sound radiated by the virtual source. This equalizer mimics the global frequency response of the source, similar to how a loudspeaker colors the sound.

This filter section is for equalizing the on-axis part of the sound radiated by the virtual source. Most, if not all commercially available loudspeakers do exhibit a radically different frequency response whether a listener or microphone is right in front of it or to the side.

Setting a rather flat on-axis equalizer curve, and maybe cutting the treble and mids for the omni response would be a good starting point to emulate a real-world speaker, so this is the default setting for these filters. 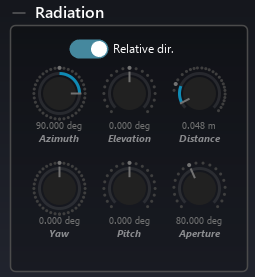 This section controls the simulation of acoustic radiation in relation to the location and emitter orientation of the virtual source. Use these parameters to simulate how a source will interact inside the reverberant environment.

This switch is a very simple way for a user to achieve a more consistent result as regards the natural conservation of a source’s presence. The algorithm will continuously maintain the on-axis focus for each virtual source - or for every emitter in a grouped source - so that it is consistently oriented towards the listener position. When not engaged, a source remains in the same constant direction which is what might be preferred if something is passing through in a spatial design.

Distance from the source to the center reference point (listener position), in meters.

Angle between the source location and the listener position front reference axis, in degrees.

Angle of the source direct orientation relative to the listener-source axis, in degrees.

Source direct orientation pitch angle, in degrees. Think of pitch in the nautical sense of the word, how a boat pitches up and down in stormy seas.

Pitch and Yaw can be used to make a source more diffuse by turning its direct sound away from the listener.

The aperture parameter relates to the “sound cone” projected by the virtual source in the acoustic space, and is measured in degrees. It determines whether the source will be very directive (small aperture), or omnidirectional (large aperture) inside the reverberant environment.

Aperture can make a source ‘activate’ more of the acoustic space.

This panel will only be available when the room is a Channel-Based Format which features one or several LFE speakers in its configuration, such as DTU7.1 / 5.1 / 22.2, AURO and ATMOS for example.

It will send an amount of the source into the dedicated LFE speaker channels of the output channel based configuration. 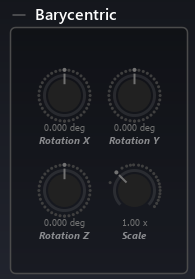 These rotational transformations will only work on a virtual source that consists of more than one emitter in a grouped channel based arrangement. They will also become active when you shift-select mono sources together to form an ad hoc group or shift-select mono sources in combination with grouped channel-based sources. The 3 dimensional group rotations are calculated using a ‘barycentric gravity’ method to transform a network of sound sources constrained in a group relationship.

Rotate a group cluster around the XYZ axis of their common barycentric pivot point.

Scale the group cluster, maintaining their barycenter and relative relationships.

The barycentric transformations will continue to orient their on-axis energy towards the listener position if the relative direction algorithm is enabled. 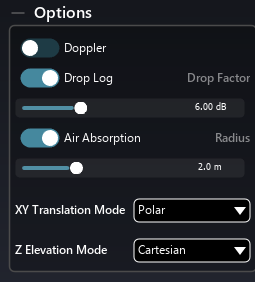 Finally, there are some options available for each source. It is possible to edit a global parameter on the room panel on the preferences page.

The Doppler effect is a well-known wave propagation phenomenon where the height of a sound perceived from a listener standpoint rises when the source is accelerating, and falls when decelerating. This is the fire siren pitch going up then down when passing you. It will only be heard if you rapidly move the source locations quite fast, but thanks to the virtual nature of the SPAT, you can bypass Physics’ laws and manually inhibit it using this switch, should it be unsuitable for the particular application you are dealing with.

Careful with this effect: it adds the delay corresponding on the distance between the source and the listener point.

Owing to a fundamental law of acoustics and geometry - namely energy conservation - sound pressure drops in level as one moves away from the source. Enable Drop Log for an acoustically accurate setting, which corresponds to a drop value attenuation every time the distance from the source is doubled (logarithmic behavior). The default Drop Factor of 6 dB is also the acoustically accurate setting.

Simulates the frequency-dependent absorption of air, where high frequencies roll off quicker than low-frequencies with respect to distance. You have most probably noticed this phenomenon when you are far away from a concert venue and only able to hear the bass, and gradually start to hear the whole mix as you get closer.

Specifies the radius of a sphere or disc in meters, centered around the listener position, where the drop attenuation is not taken into account, and the sound level is kept constant in regard to distance. This is not only useful to prevent any dramatic sound level peak when placing a source too close to the listener, it also reflects real-world behavior quite accurately, where sources do have a certain physical size, unlike point sources that are commonly used to model far-field acoustics. This “no-drop” zone is displayed as a transparent sphere of matching radius in the Room graphics.

The radius is now depreciated, except on rare case where you really want a source to have a different behavior than others. Please prefer the room protection zone width to prevent the audio drop.

Spreading is a percentage factor that defines how a sound source will appear to spread out across speakers or virtual speakers. It is similar to Aperture in its focusing effect but will translate differently across certain channel-based speaker arrangements according to how many speakers are involved.

! The spread factor is not available on binaural and WFS.

This parameter is only available to a source if the room it is simulated in has been specified to be using the K Nearest Neighbor panning type. It sets a maximum limit to the number of speakers that the algorithm can use as neighbors in its search for speakers to activate in relation to a virtual source. On a 10-speaker setup, 1-10 % will be the closest speaker to source. 11%-20% will be 2, and so forth.